Easter has long since become, at least in certain Protestant circles, a day aimed largely at “catching” a few from the crowds in the pews that otherwise make themselves scarce at ecclesial gatherings. This means, to the extent such efforts are made in given congregations, pastors and other church leaders must attempt a precarious balancing act, looking to incentivize attendance among non-churchgoers with perquisites and simplify the liturgy and sermon to make them more “relevant,” or at least friendlier to the uninitiated, while simultaneously offering the faithful just enough of the tradition via readings and hymns to make them feel like they’d been to church.

Such attempts, in my admittedly curmudgeonly experience, are at best marginally successful. The visiting masses are sufficiently well-inoculated against even friendly Christianity that they witness the spectacle politely, without being too much tempted to reorient their lives in the direction it points, while many church members leave a bit perplexed—again—about exactly what it is that makes Easter the highpoint of the Christian year. Having witnessed this approach several times in more than one strand of Christian tradition, I am increasingly convinced it is misbegotten. END_OF_DOCUMENT_TOKEN_TO_BE_REPLACED

One of the steadfast realities of following the lectionary is the predictable rhythm of its three-year cycle of readings. Preparing a sermon for Baptism of the Lord Sunday in 2011?  You might go back to your files from 2008 to see what text(s) you focused on, what themes prevailed, what prayers and hymns were chosen for worship. You might—depending on your congregation’s current needs and challenges—revisit, rework, recycle, as it were, the riches of the lectionary cycle.

But because Easter is so late this year—a day short of the latest date possible—there was no eighth Sunday After Epiphany in 2008 or 2005 or 2002. In fact, the factors that determine the date of the Church’s prime moveable feast are so unusual this year that an eighth Sunday after Epiphany is an astronomical and liturgical rarity. This means that, with a longer stretch of Sundays between Epiphany and Lent, we take in much more of the Sermon on the Mount, Year A’s appointed reading for the Sundays after Epiphany. And this week’s portion from Matthew 6—rare in the Sunday cycle but familiar in our hearing—couldn’t be more timely. END_OF_DOCUMENT_TOKEN_TO_BE_REPLACED

“Love your enemies and pray for those who persecute you,” Jesus commands. That’s nowhere near as rosy and naïve as the bumper sticker I once came across, in a boutique full of inspirational art and Buddhist tchotckes, that read: “Love your enemies and you won’t have any.”

There once was at time that I, too, believed I could change the world and others by wishing or willing it so. I was fortunate to unlearn that nonsense before I caused too much harm. END_OF_DOCUMENT_TOKEN_TO_BE_REPLACED

Reality hunger.  I read a book by that title last summer and the title, more than the book, describes what many of us are feeling these days.  We long for the concrete, the real, the hard surfaced world against all of the abstractions of the Economy, of the powers and institutions that seem to dictate our lives without our understanding the what and who and why of their existence.  And yet, we must understand that this abstraction is a choice, that our hunger goes unsatiated because we continue to eat the high fructose corn syrup, hydrogenated fare of the convenience stores lining the interstate through nowhere and to nowhere.  Call them the temple foods of false gods—cheap, convenient, subsidized lies that seem like the real stuff, but leave us sick and unhealthy. END_OF_DOCUMENT_TOKEN_TO_BE_REPLACED 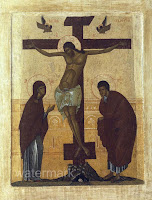 When I came to you, brothers and sisters, I did not come proclaiming the mystery of God to you in lofty words or wisdom. For I decided to know nothing among you except Jesus Christ, and him crucified.

What do I regard as essential in my preaching? Do I rely on sounding scholarly or worldly wise? Do I trust in having something new and captivating to say? END_OF_DOCUMENT_TOKEN_TO_BE_REPLACED