“You can’t conceive, my child, nor can I or anyone
the … appalling … strangeness of the mercy of God.”
-Graham Greene, Brighton Rock

Mrs. Turpin, the main character in Flannery O’Connor’s short story, “Revelation,” (published 1965) is grateful. She’s aware, after all, that God could have created things differently. She might not have been white or middle class, which, she thanks God, she is. She’s even grateful that her daily, sometimes distasteful, encounters with poor blacks and “white trash” remind her that “…one had to have certain things before you could know certain things.”

What she knows is this: she lives in a fair and ordered world, each person occupying the place he or she deserves and awaiting, in the life to come, a just and well-earned reward. If she weren’t such a mid-twentieth century model of Southern primness, she might be mistaken for a twenty-first century bourgeois Buddhist hipster, knowingly whispering, “karma’s a bitch,” in the presence of the unenlightened.

But there’s another thing Mrs. Turpin knows: the world is neither so fair nor so ordered as she would like. Life’s chaos and unfairness gnaws at her and she finds herself grasping for reassurance, often with disturbing results: END_OF_DOCUMENT_TOKEN_TO_BE_REPLACED 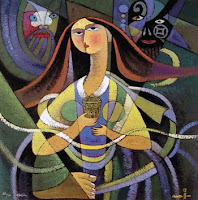 The readings for this Sunday, taken all together, create some unsettling tensions.

The passage from 1 Kings recounts the refusal of Naboth the Jezreelite to sell his vineyard to his neighbor, King Ahab. When the king goes home to sulk about this, his wife Jezebel takes charge and soon enough a property dispute has led to a crime scene: Naboth is wrongly defamed and summarily executed. Ahab gets his vineyard after all.

Psalm 5 reads something like Naboth’s own prayer from beyond the grave in which he petitions Yahweh to “give heed to my sighing . . . for you are not a God who delights in wickedness . . . you destroy those who speak lies” (vv. 1, 4, 6). Back in 1 Kings, the shocking story does indeed conclude with a chilling warning delivered to Ahab by the prophet Elijah: “I will bring disaster on you” (v. 21a). END_OF_DOCUMENT_TOKEN_TO_BE_REPLACED