Indeed, there have to be factions among you, for only so will it become clear who among you are genuine.
1 Corinthians 11:19

Much has been written lately about the uncivil disintegration of contemporary American society, and for good reason; each day occasions new, often vicious spoken and written attacks calling into question the veracity, integrity, and intentions of those holding views different from the speaker or writer. Christians haven’t opted out of all the name calling, and have penned missives – some against their brothers and sisters – every bit as strident as those of our secular neighbors. I recently read part of such an exchange, which left me, as the news these days tends to do, despondent. And then I read the lectionary texts for this week, which offered a bit of perspective, if not consolation. END_OF_DOCUMENT_TOKEN_TO_BE_REPLACED

In today’s second reading, Paul writes, “Owe nothing to anyone except to love one another….Love is the fulfilling of the law.” To say that Christianity is about love is, of course, right. But if we mistake love for niceness, the same statement becomes terribly wrong. Dostoyevsky had his wise spiritual leader Fr. Zossima comment, when a woman came to him disappointed and embittered by her attempts to be charitable, “Love in action is a harsh and dreadful thing compared to love in dreams.” Our reading from Matthew’s gospel today calls us to a harsh and dreadful love, one that speaks words we would rather not speak and hears words we would rather not hear. END_OF_DOCUMENT_TOKEN_TO_BE_REPLACED

The students whose work I evaluate would probably disagree, but it’s my disposition, both by nature and upbringing, to be averse to conflict. The very thought of confrontation puts me ill at ease, and I will go out of my way to avoid saying or doing anything that might hurt another’s feelings or create an unhappy tension between us. I am far too captive to and dependent upon the esteem of others. I want not just to be respected, but liked – by just about everyone.

My past is strewn with occasions where I allowed another’s offense against me or someone else to slide simply because I didn’t care to suffer the discomfort of confronting them. Imagine my consternation, then, when I read this week’s lectionary texts, two of which address in a disturbingly direct manner not just the importance, but the absolute necessity of confronting and speaking truthfully to wrongdoers. Both are absolutely clear about what is at stake: compassionate truth telling is often nothing less than a matter of life and death. END_OF_DOCUMENT_TOKEN_TO_BE_REPLACED

“Junk-yard dog.” The first time he ever called her that, I bristled. Wish I could tell you it was said in private, out of ear-shot, but it wasn’t. It was his term of affection for her, said often to her face. I’d been coaching kids’ soccer for all of three weeks, eight year olds, and her mom had struggled to consistently get her to practices and games. So my assistant, a dear man and veteran coach, but living in a place where such ignorant terms of endearment (or not) were still somewhat culturally accepted, had offered to give her rides to practices and games.

She was from the “wrong” side of town, he told me. He worried about her, he told me, and wanted different for her. He ached for our team to be a shiny spot in her life, where she didn’t have to think about home. His daughters were the same age; I watched his huge dad-heart at work over this little girl and I knew for certain he cared. But his name for her most of the season long still grated on me each time I heard it – just the same way Jesus’ words in the gospel text this week grate on me. END_OF_DOCUMENT_TOKEN_TO_BE_REPLACED 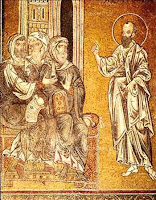 Recently I had to work with a utility company on behalf of a woman whom our church was assisting financially.  The woman was getting nowhere with the company, so I tried to help her with the process.  It took eight calls to them before I could speak with a supervisor who would hear my concerns and rectify the billing problems the customer had.  In the first five calls, five different customer service representatives each told me different information about how the woman’s situation.

One told me everything was paid up.  Another told me that the customer had a $500 balance.  Another told me they’d ask the back office to research the issue, and I could call back in 2-3 days for an answer.  I did, and I was told that that timeline was wrong; it would take 5-7 days for the research to be completed.  After that time had passed, I called back.  That representative told me the timeline was wrong; it would take 4-6 weeks.  By the time I got to the supervisor, who was very kind and understanding, I suggested to her that some training was needed to improve consistency among the representatives.  She sighed and explained that in the last year, not only had they fired the original company to whom they outsourced the customer service calls and then hired a new company, the utility company had also begun to use a new computer system.  Balances paid during certain months were not credited to customers’ accounts, past due and termination notices were sent out incorrectly, and the new employees didn’t have much training to handle any of it.  I felt so sorry for her and said so.  She said brightly, “I’ve just learned that there are never problems; there are only opportunities.  And every morning I come to work, I am faced with all sorts of opportunities.” END_OF_DOCUMENT_TOKEN_TO_BE_REPLACED