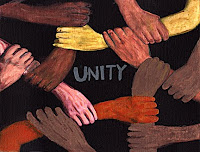 [Two lectionary posts this week: one for the Seventh Sunday of Easter and one for Ascension Sunday (reposted from May 2009)]

“I ask not only on behalf of these, but also on behalf of those who will believe in me through their word, that they may all be one.” (John 17:20-21a).

It seems there’s not much talk of ecumenism these days—not in books, not on blogs, not even in and among churches.  Maybe that’s because forty years of dogged efforts at dialogue and mutual understanding have borne some real fruit: Calvinists are far less suspicious of Catholics than they used to be and vice versa; Methodists and Lutherans are now in full communion with one another.

Of course, the ecclesial traditions most vested in the ecumenical movement are now among those experiencing significant decline, and the growing churches—Pentecostal, non-denominational, “emergent” of this or that variety—don’t seem to place the same high premium on bridge-building and cross-over conversations. So maybe it’s too soon to say “mission accomplished” when it comes to Church unity.

Of course it is. Jesus’ prayer in this week’s Gospel reading is a stinging reminder of his Body’s continued disunity. But what can and should be said about this obstinate, obvious reality? How does one preach this familiar text in ways that signal urgency but not despair, that convey the gravity of the situation while also offering a word of hope? I have no idea. END_OF_DOCUMENT_TOKEN_TO_BE_REPLACED

St. Augustine considered the Feast of the Ascension the crown of all Christian festivals. Today we may give it an obligatory nod as we make our way liturgically from Easter to Pentecost, but we’re often not quite sure what to do with it theologically, pastorally, exegetically. The clunky literalism routinely inspired by the Luke-Acts vision of the ascension—Jesus rocketing upward into outer space—is not a little embarrassing.

Whatever historical event lies behind the Luke-Acts narratives of Jesus’ ascension into heaven—and the fact that the two accounts differ in important ways might be a clue that a surface-literal reading is not what the author had in mind—a couple of things stand out: the centrality of worship and the reimagining of “all rule and authority and power and dominion.”

Tom Wright points out that Luke’s gospel ends, as it began, in the Temple at Jerusalem. “Worship of the living God,” Wright says, “is at the heart of Luke’s vision of the Christian life.” Jesus’ ascension into heaven, then, is not “beam me up, Scotty” science fiction, but rather that which makes possible the church’s existence. END_OF_DOCUMENT_TOKEN_TO_BE_REPLACED

When I read the Ascension texts for today (or this upcoming Sunday if you are in a Protestant tradition that celebrates the Ascension on the following Sunday), my tendency is to immediately jump to the conclusion of Luke’s report in Acts 1 when the angels appear to ask the disciples: “Why do you stand looking up at heaven?” I hear in this question an affirmation of my own need for action—the angels are telling those disciples to get on with it already. There is work to be done witnessing, proclaiming, releasing the captives, caring for the sick, and forgiving enemies, among other things! END_OF_DOCUMENT_TOKEN_TO_BE_REPLACED