“You speak of signs and wonders / I need something other / I would believe if I was able / But I’m waiting on the crumbs from your table. (“Crumbs From Your Table,” U2, How to Dismantle an Atomic Bomb)

It’s become something of a tradition: I start a conversation via email with a large distribution list I have, made up mostly of fellow church members but also including some far-flung friends and colleagues. Often, I share my bLOGOS reflections on the lectionary or make a plea for help with a project or program; sometimes I simply direct folks to an interesting website or blog. The point is not to court controversy for its own sake, but sometimes the topics and the ensuing conversation take us into complex social, political, or theological issues where the moral murkiness can be difficult to navigate. END_OF_DOCUMENT_TOKEN_TO_BE_REPLACED

According to the Christian liturgical calendar, we are now gathering to worship on Sundays during the Season after Pentecost, which is also often referred to as Ordinary Time even though the Scriptures for Sunday, August 17th (Roman Catholic lectionary) are full of extraordinary, even quite surprising, tidings. Another name for this season is Kingdomtide, and I would like to suggest that these Scripture passages are about the kin-dom that God desires to happen on earth as it is in heaven. That is, the common thread running throughout these readings is that God’s salvation essentially involves hospitality, compassion, and justice for all peoples–including, unexpectedly, those who are “other.” END_OF_DOCUMENT_TOKEN_TO_BE_REPLACED

I’ve been following a blog debate over at www.theolog.org between a scientist of some sort, hostile to religion generally and Christianity particularly, and a pious defender of the faith. In my view, neither has been very impressive in articulating his case against the other, and the back-and-forth accusations and “gotcha’s” and outright vitriol have only escalated as the debate has gone on (and on and on). I tried briefly to weigh in on it earlier this week, calling for a little charity and humility from both sides, but, like a sister trying to pull her two brothers off each other in a backyard brawl, I was roundly ignored. Lesson learned.

The gospel text from Matthew 14 this week strikes me as the kind of passage over which science guy and defender guy would go at it, arguing past each other all the while—as they have been doing all week. The ghostly Jesus walking on the water is too much for the rationalist to take in; it’s laughable, even—easy pickins. The mocking denial of such an archetype biblical image of Jesus (and the sacrosanct truth it represents) is scandalous to the defender’s deeply-felt piety. You can almost hear defender guy quoting Jesus back at his opponent: “You of little faith, why do you doubt?” (14:31). Disagreement. Accusation. Counter-accusation. END_OF_DOCUMENT_TOKEN_TO_BE_REPLACED 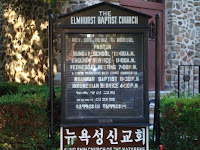 While longer on sociology than theology or ecclesiology (what can one expect from the news industry?), a recent CNN story on the difficulties inherent in integrating churches resonates with much said at the recent EP gathering.

About the time I was in college, young comedian Steve Martin had a routine called “let’s get small.” Playing on the mid-seventies countercultural “let’s get high” Martin invited everyone to come to his house and “get small.” Martin said that “getting small” was dangerous for children because they would get “really, really small” and it was also impossible for the police to put you in jail for being small because you’d walk out right between the bars. It was a short, quirky piece of the sort that made Martin famous.

If it was countercultural in 1977, “being small” is even more so in 2008 in a culture that seems to idolize the Big and encourages everyone to “get big or get out” as a Secretary of Agriculture once told farmers. END_OF_DOCUMENT_TOKEN_TO_BE_REPLACED

(Matthew 14:13-21) Immediately before the story of the feeding of the five thousand is a description of a very different sort of meal: John the Baptizer’s head on a platter. And just as women and children are included among the crowds fed on the beach with bread and fish (a detail unique to Matthew’s version of the story), the female sex is also represented in the account of John’s demise. Herodias, sister-in-law of Herod, asks for the head of the Baptist; her nameless daughter, with no detectable squeamishness, delivers the request to the king and ultimately the plated head to her mother. That women in all of their moral complexity are present throughout Matthew’s gospel (recall also the women who appear in Matthew’s genealogy of Jesus in chapter one) is an observation worthy of closer scrutiny. See, for instance, Jane Kopas’ 1990 essay from Theology Today.

Also interesting is the juxtaposition of fear and death (in the story of John’s murder) with that of fulfillment and abundance in the feeding narrative. END_OF_DOCUMENT_TOKEN_TO_BE_REPLACED

Perhaps the recurring issue in discussions of Christian discipleship regards simply whether or not it is something that Christians should think they can actually do. Not long into the established church’s history the notion became prominent that the ethics of Jesus, particularly as recorded in the Sermon on the Mount (Matt. 5-7) and other prominent texts in the gospels (cf. Luke 6:17-46; 14:15-34), simply cannot be done by people who live in the real world. They are rather “counsels of perfection” which are either only for a specific clerical or monastic caste (as in Medieval Catholicism) or they are simply there to remind us all of our complete inability as sinners to conform to God’s commands (as in Luther and most of Protestantism after him). END_OF_DOCUMENT_TOKEN_TO_BE_REPLACED

“The kingdom of heaven is like a mustard seed that someone took and sowed in his field; it is the smallest of all the seeds, but when it has grown it is the greatest of shrubs and becomes a tree, so that the birds of the air come and make nests in its branches.” — Matthew 13:31-33

It has often been pointed out that when Jesus compares the kingdom of God to a shrub, he is having a bit of fun with us. But finding the humor in the Bible isn’t something we overly-serious modern readers are very good at. We’re more likely to treat parables like this one as if they were folk-wisdom formulas for personal or group success. Think about sermons you’ve heard on finances (“your small gift, sown in faith, will produce a big return!”) or church growth (“if we’re faithful, God will make us grow!”). END_OF_DOCUMENT_TOKEN_TO_BE_REPLACED

A voice of one calling: “In the desert prepare the way for the LORD; make straight in the wilderness a highway for our God. — Isaiah 40:3 (NIV)

“I’ve been to conferences on race and racism before, but this is different,” I was told several times at this summer’s Ekklesia Project gathering in Chicago. I agree. There was far less nonsense and posturing than I’ve endured at previous, allegedly “frank” discussions of race. We spoke, sang and worshiped together, without the “It’s a Small World After All,” ceremonies that suggest a few up-tempo songs will make restitution for centuries of bad theology and worse ecclesiology. The mood steered a difficult course between penitential and determined. END_OF_DOCUMENT_TOKEN_TO_BE_REPLACED

It’s been more than a week since the Gathering ended and my head is still swimming and my heart is still full. There is always so much to take in when we meet each summer for conversation, worship, learning, and fellowship.

I traveled to Chicago this year with three good friends from my church—new endorsers of EP and first-time Gathering attendees. These friends—Judy, Chris, and Greg—were overwhelmed by all they encountered (in the best possible sense of that word) and we continue to talk about what we experienced, hoping that our own transformed thinking about matters of race and racism in the body of Christ might come to bear good fruit in the ecclesial context in which we find ourselves. END_OF_DOCUMENT_TOKEN_TO_BE_REPLACED