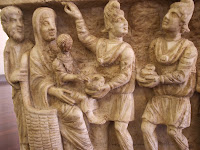 It’s no wonder that parts of the Church used to observe Christmas, Epiphany, and the Baptism of the Lord as part of one unified and extended celebration.  There’s a lot of revelation going on there.  Christ’s identity is revealed to shepherds, wise men, John the Baptist, and those gathered on the banks of the Jordan.

The revelation continues on the Sundays after the Epiphany.  God appeals to our senses.  Whereas Ragan talked about seeing last week, this week we hear the Father’s voice tell us that the guy coming up out of the dirty sin-water is his Son.

God’s voice speaks creation into existence and a Word into flesh.   If you’re left with any doubt about the power of that voice, read Psalm 29, which includes my favorite Scriptural alliteration:  “The voice of the Lord flashes forth flames of fire.”  (How fun to say and sing in the Psalter!)

In the lectionary weeks to come, the voice of the Father will issue forth from the Son’s mouth, inviting us (John 1:39 and Matthew 4:19), knowing us (John 1:42), and continuing to reveal to us the Way (Matthew 5-7).  We’ll hear Jesus’s voice for five weeks as we dwell on the words of the Sermon on the Mount:

“Jesus began to speak and taught them, saying…”
“You have heard it said…but I say to you…”
“yet I tell you…”

The words of this sermon have at times unfortunately been reduced to “impossible rules to live by.”  More than one preacher or exegete has tried to dismiss Jesus’ words as archaic, context-bound, meant only for individuals and not for the church, or so impossibly difficult to carry out that surely they only have spiritual meaning for us.

Lest we forget that hard word of that sermon is good news preached to us by none other than God Incarnate, the story of the Transfiguration gives us a verbal reminder.   The Father speaks directly to humanity again: “This is my beloved Son.  Listen to him!”  This announcement, a mirror of the words spoken at Jesus’ baptism and a wonderful bookend to the liturgical season, forces those who dismiss Jesus’ words in the Sermon on the Mount to come to terms with the reality of the revelation of God to the world.  That revelation happens not only on mountaintops and riverbanks, but in persecutions, poverty, marriages, offerings, and among panhandlers—in short, living out the Sermon on the Mount.  To those who are striving to live the Way, this announcement gives assurance, comfort and hope.

God has spoken to the world…and looks to us to speak as well.

After the vision of the shiny Jesus fades, Jesus warns the disciples to not tell anyone about this vision until after he has been resurrected.  If they were good Protestants, they were relieved by this; they had a reprieve before they had to tell anybody about Jesus.  Not for long, though.  Jesus’s command presumes that there will be a time when they will be expected to tell, share, and invite.  We’re in that time—a time where our actions need to be accompanied by invitation.

We who don’t feel equipped to tell, share, and invite might want to join in the petition presented in the hymn “Word of God, Come Down on Earth”:

Word that caused blind eyes to see,
speak and heal our mortal blindness;
deaf we are, our healer be,
loose our tongues to tell your kindness.”

May our tongues be loosened…end employed.