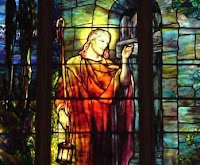 Many years ago I heard Walter Brueggemann say to a room full of preachers, “We must always hold before our people God’s commands to obedience.  Always.  But we must also always be patient with one another as we fail to heed those commands.  Always.”

The readings for this Sunday are all about God’s commands to obey and our failure to obey.  According to Luke, Jesus found himself in a conversation about some current tragedies, the gist of which had everyone wondering if the people who suffered the tragedies had it coming or not.  Perhaps bad things happened to these people because they were bad.  Jesus says, “No. These people were no worse than anybody else.  But I tell you, this is a reminder that everyone had better change their ways.  Sooner or later there is an accounting.”

When I was a Baptist kid growing up in a small town in west Texas going to funerals was a common part of life.  It was also common for the preacher at the funeral to make sure that the occasion of burying someone was also the opportunity for everyone else to repent and “get saved.”  It didn’t matter that everyone there was a born-again-washed-in-the-blood-baptized-by-immersion-Bible-believing-Baptist-Christian.  Yet sitting there with  death ever so much before us and the hotter-than-blue-blazes Texas summer heat adding to the sense of urgency, both because none of us wanted to go to hell and all of us wanted to get out of the stifling church, we took seriously our own sins and the call to repent.  Sooner or later there is an accounting.

Over the years, I went to school, read books, and rebelled against Fundamentalism.  When I heard Brueggemann long ago, I recall some of the mature, sophisticated clergy – the very kind I yearned to be like – respond, “The language of command and obedience is too harsh.  Where’s the grace?”  Likewise, I came to believe that calling people to repentance at funerals was too harsh.  We needed to speak of comfort and grace, instead.

Jesus tells us of grace.  He says there was a fig tree which did not produce fruit and the owner said, “Cut it down.  It’s not producing; it’s taking up space and using up the nutrients of the soil.”  The caretaker responded, “Give it more time.  Let me fertilize it, work the ground around it, and see if I can get it to bear fruit. Next year, if it still is bare, then we’ll cut it down.”

Sooner or later there is an accounting.  Perhaps the grace is that there is still time.

After being a pastor for twenty years with most of the same people, I’ve learned to not be shy about God’s command to obedience and our call to repent.  I’ve also learned that being friends gives us a grace and patience with one another that allows us to talk about God’s commands and our failures in ways that I didn’t understand when I was younger and a short-term pastor.  Some of these friends have told me that lying in a hospital bed dying of cancer does clear one’s mind of the underbrush of trivialities; the focus becomes God, life, and death.  That’s why a good pastor can say, “Well, let’s talk about your death.  Let’s talk about God.  And let’s talk about dying well and reconciling with God and with all your friends and loved ones.”  I’ve found that people in such circumstances are often starving for such a conversation.

But people in such circumstances know that time is short.  What about the rest of us?  What about all of us who are not in hospital rooms or attending a funeral?  Perhaps that’s why we have Lent.  From the beginning on Ash Wednesday when we look into one another’s eyes and hear the unvarnished truth, “You are dust and to dust you shall return,” Lent is talking about God, death, life, and getting our lives in order.  It is about clearing away the underbrush of trivialities and focusing our lives upon the commands of God and our failure to obey those commands.  And it is about us being patient with one another as we face and repent of our failures.

One of my mentors and heroes was Browning Ware, long-time pastor of the First Baptist Church of Austin, Texas.  He was tall, angular, and ruggedly handsome with a crusty voice that could put the fear of the Lord into pompous religionists or share the love of God with an overworked, under-rested, discouraged waitress at an all-night coffee shop.  One day an old, rattle-trap pickup drove up to the downtown First Baptist Church and two men got out dressed in work clothes.  The older man was on crutches and was being helped by the younger man as they made their way into the church office and demanded to see Browning Ware. Without an appointment, the receptionist hesitated about what to do but Browning happened to pass by and see them.  Warm and loud words of greetings were exchanged; apparently the two men were father and son and members of a rural church Browning had served many years before as a student pastor, and they all went back to Browning’s study.  The older man on crutches pulled up his split pants leg to expose an awful smelling, bandaged-wrapped leg.  He explained that he had gangrene and the doctors were warning of dire consequences.  He said, “Browning, when you were my pastor you always told the truth.  Now tell me the truth.  Am I going to die?”  And the rest of the afternoon these three friends, father and son and pastor, spoke of the truth of life, death, and God.

The truth is that sooner or later there is an accounting.  The grace is that we still have time to repent.

One Response to “Sooner or Later”